Beneath a Scarlet Sky

Every once in a while, I read a book than fundamentally changes my world view. This is what happened to me when I read Beneath a Scarlet Sky by Mark Sullivan. Though the book is written as fiction, it is heavily rooted in painstaking research of the experiences of an Italian boy, Pino Lella, as he grows into a man before and during World War II.

The story itself is riveting, the events astonishing in and of themselves. Pino’s loss of innocence is profound and profoundly sad. From being a giddy, girl-enthralled teenager, Pino’s grit, faith and skill – whether guiding Jews to the border of Switzerland, skiing with a pregnant woman on his back or driving while being shot at – are a credit to humanity itself. But it is the loss of humanism – by both the Allies and the Nazis -- that so deeply affected me. War leaves people so deprived, so powerless, so savaged -- that savagery against one’s fellow man becomes inevitable. Not only that, but the shear randomness of life is epitomized when Pino’s sacrifices end up being of questionable value.

If all this seems macabre and disillusioning, such that you are thinking of rejecting my recommendation of this book, please reconsider. This is a story of  human dedication and resilience, a story that will amaze and magnetize you, a story of life itself: you should not miss it!

Last week was an exercise in working with fear. Any type of surgery brings on a whopper case of the jitters, but this was eye surgery, and the image of metal instruments puncturing my eyeball left me catatonic. As it turned out, the worst part was putting in the IV. My veins seem to know what is happening and line up a whole bunch of evasion tactics: now-you-see-me-now-you-don’t, the magical collapsing vein and a new trick – the curve away from the needle. Almost funny. But not quite.

After that, things got much better. It started with valium and progressed to fenadryl, and by the time I was headed into the OR, I was floating pleasantly and totally unconcerned. Do I remember any of it? Just the part where I realized that my eye had been closed the entire time, though I could hear the doctor doing things and feel his proximity. But how is it possible for him to operate with my eye closed? Awesome, no?

Okay, they must have temporarily blinded me. But by the time I realized that, it was over. So, if anything was learned, it was this: if you are terrified enough, and if you imagine horrific scenarios, and if the sky is surely falling in, all you have to do is relax.

For the first time in a year, I was able to socialize with friends this week: have dinner, sip wine, pet the cat or dog together, giggle and hoot, chat, play board games – all without masks on. Such a joy to once again see the faces of my friends, to take in the curve of their lips as they smile and laugh, to hear their words, clear and unmuffled. Such a long, long time it’s been.

Experiencing the closeness of people I truly care about is just so powerful. Standing side-by-side to cut onions or gaze out the window. It is so very hard to quantify what we have missed in the past year, and how that void has affected us. Speaking for myself, the sense of isolation and the reality of distance created a sense of loneliness and solitude that was only partly eased by phone calls and Zoom. We long for time together, we hurt for each other, we need hugs and smiles and laughter to feel truly alive.

There was a certain awkwardness in the beginning: that ingrained feeling of being too close, the mental alarm warning ‘it’s dangerous, back away.’ It’s a learned reaction, and can be unlearned.

So now we dream: of concerts, jazz clubs, restaurants, the ballet, the symphony, the state fair, parades, theater, coffee shops and bars. Some may already go to these places, but for now, I am content to hang out with my friends again and watch life open like a flower, one petal at a time.

Here in Park City, Utah, the slopes are still open but the weather is way too warm (66 degrees today!), and the gushy snow is melting fast. It's sad, saying goodbye to the thrill of zipping down a mountain to the sound of crunching snow, but it's also a time brimming with new promises: campfires, mountain trails, rock climbing, cooking on the grill, lengthening days of warmth and sunshine. The trick is to make sure no magpies build their nest 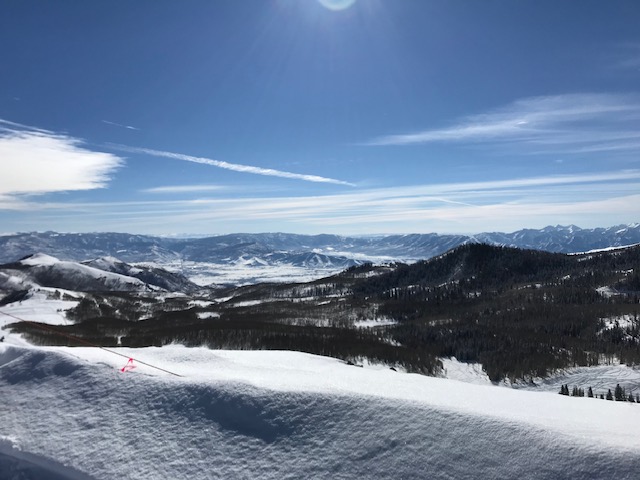 s in our atrium!!

It was bad enough that the flight left at 6 am; I had to set my alarm for 3:45. Turned out that was the easy part.

I shuffled down the aisle to my seat, only to find it was occupied by an adorable little girl about four years old, whose twin two-year-old sisters had the middle and window seats. “Would you mind if they all sat together?” asked a slender brunette across the aisle from them.

“Sure,” I said. She told me the emptied seats were right behind the girls, so I began to wedge my overstuffed briefcase under the seat.

Behind me towered a heavy set man in a sleeveless shirt. “Do you mind if we all sit together?” the Mom asked him.

His response was unenthusiastic, but he agreed then turned to me. “I’m too big to sit in the middle seat,” he said. His voice was flat. He had a large, gray tattoo on his arm with the word “Mother” inscribed in what looked like a tomato surrounded by roses under a cloud-filled sky. At least I think it was clouds.

I quickly saw his point and relocated my briefcase. With luxuriant anticipation of my nap, I folded into my seat and closed my eyes. I’d been looking forward to this moment ever since 3:45 am: the chance for a gentle drift into a lazy nap.

Blam! Blam! Blam! My eyes popped open. The child next to the window slammed her body into her seat, over and over. The entire seat from headrest to floorboard vibrated violently, and the tray table rattled loudly as it bashed into the back of the seat.

“Oh, no” said Tattoo. His words were slow, and the tone of voice was soft but steely. My antennae went up. “Paula, no,” said the mother. But there was no way she could reach the child in the window seat.

The little girl in the aisle seat decided slamming against the seat must be fine sport, and started banging her seat as well. The two girls set up a cacophony of clatters and shakes that would make a monk grind his teeth.

Tattoo began humming, a tense and escalating sound. The muscles on his forearms contracted, the pitch of the hum grew higher.

He would not look at me, his jaw clenched. This was a two hour forty minute flight and we hadn’t taken off yet.

“Chloe,” said the Mother. She was speaking Spanish, but whatever she said worked. Chloe stopped. The engines roared: lift off. I closed my eyes, maybe that nap was still within reach.

Bam! Bam! Bam! The seat to my right jangled and shook. I could not figure out how such a small body could wreck such havoc on a riveted seat. Bam!

“Oh, no,” said Tattoo, his voice deep and grave. I glanced at him. His eyes were narrow and his breathing was shallow. The Mom put the older child across the aisle and sat next to the twins. Things calmed a bit. For a while. Then the banging started again and Tattoo recommenced his eerie humming, going up in pitch as the seat-bashing continued.

“Paula,” said the Mother, over and over and over. The banging restarted, the child was admonished, the banging stopped for no more than a minute, then restarted with the admonishment, the pause and the restart. No, no nap this trip.

Tattoo was tense, too tense.

“She never raises her voice,” I pointed out about the Mother, hoping to introduce a concept.

Patience, yes, let’s stay on that note, I thought.

When we finally (ho, and I do mean finally) landed, Tattoo and I high-fived in celebration of our survival. Alas, this was too soon. Just after we settled back into our seats, relishing victory, an announcement came on: “Ladies and Gentlemen, we have just learned there will be a delay in getting our gate assignment. Please stay in your seats with your seatbelts fastened. We do apologize for any inconvenience.”

A second can go by fast. Unless you are being tortured, or unless you are sitting next to Tattoo with a seat banger in front of him. No airport ever seemed so much like a haven. I just hope Tattoo doesn’t have kids.